Twenty years ago, Nigel Marsh was an overweight mortgage slave struggling to balance a career, marriage and four children under eight. Until he lost his job.

In Fat, Forty and Fired, Nigel wrote about falling off the corporate hamster wheel and surviving. Now that he’s approaching sixty, he can’t help but notice it’s been a while since he stepped onto that wheel with other hamsters. One day he reads that a graduate trainee who used to work for him in London is now a global CEO with an office on the top floor of a skyscraper in New York. Nigel, by contrast, is wearing a dressing-gown and sitting at his writing desk in a dank storage room under his garage in Sydney. It’s enough to give anyone a moment of self-doubt – even a man whose ground-breaking TED Talk on work/life balance has been downloaded a whopping five million times.

In his memoir for his sixth decade on earth, Nigel ponders ageing well, sex, parenting adult children, his parents’ passing, and the secret to his living a happy life. By turns humorous, thought-provoking, poignant and life-affirming, Smart, Stupid and Sixty is a celebration of the third trimester as a privilege to be enjoyed rather than a sentence to be endured. 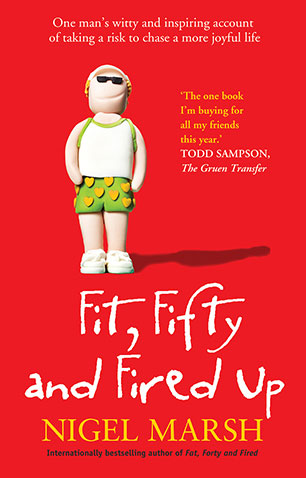 Fit, Fifty and Fired Up

From the internationally bestselling author of Overworked and Underlaid, this funny, thought-provoking memoir will make you laugh – and want to make the most of your life.

Ten years on from Fat, Forty and Fired, Nigel Marsh steps off the hamster wheel (again) to grapple with these and other less weighty questions, like: Where the hell has my wife left the cordless phone? and How do I dress my daughter as a bridge for school in ten minutes?

Written with Nigel’s customary humour and honesty, Fit, Fifty and Fired Up is a must-read for anyone who’s ever dreamt of taking a risk to live a life they feel passionate about… 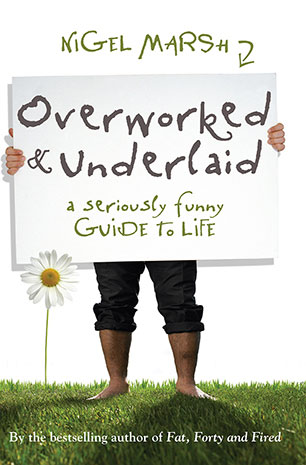 Ever felt overworked and underlaid?

Or that you’re slogging away in a job you don’t enjoy to buy things you don’t need to impress people you don’t like?

And that sometimes self-help books are no help at all?

If so, Nigel Marsh knows how you feel. In this, his latest book, the bestselling author of Fat, Forty and Fired recounts anecdotes from his recent family and work life that have given him pause to stop and think. Candid and inspiring, Marsh will make you laugh out loud as he tackles topics as diverse as work-life balance, sex in marriage (or lack of it), parenting, death – even dog ownership.

Marsh’s disarming humility and self-depreciating humour make a refreshing change from those experts who claim to have all the answers. Instead, Overworked and Underlaid is simply one vertically challenged man’s view of life – from the ground up.

‘Couples warning! Buy two copies and read them in separate, soundproof rooms . . . An irresistible invitation to laugh your way to a better view of the world.’ – Stephanie Dowrick

Read an extract in Google Preview

Nigel Marsh is a stressed, overweight mortgage slave struggling to balance a high-pressured career, a marriage and the demands of four small children under eight. Then the unthinkable happened – he loses his job.

After the initial shock (and some unpleasant surgery) Nigel decides to embrace life outside the office and spend a year taking stock. What follows is a candid and often hilarious account of how he attempts to master the art of hands-on parenting, lose 20 kilos, train for an ocean swimming race and come to terms with the growing realisation that he’s an alcoholic. Along the way we discover what men (or this man) really think about sex in marriage, being good dads, work, love, football, family, religion, self-help books and sharks, just for starters.

Fat, Forty and Fired is a rare gem, a highly entertaining, thought-provoking and inspiring memoir about falling off the hamster wheel and surviving. As Nigel says, ‘I don’t have a catchy slogan that sums up what I learnt from my year off. I do know, however, that men aren’t from Mars and fat isn’t a feminist issue. Men are from Earth and fat is fat. I don’t
claim to have usable wisdom for anyone else. All I can say is that I lived the dream of dropping out, and this is how it was for me…’

‘As thought-provoking as it is entertaining.’
– Sunday Herald Sun

‘So brilliant and funny that I neglected my wife and kids for a day so I could read it.’
– The Sun-Herald